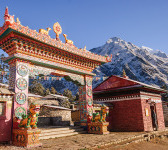 Amidst the devastation in the Asian nation of Nepal, people began receiving comforting updates about their loved ones.

Friends and family began letting their others know they were safe through a new Facebook feature called “Safety Check.”

Friends as far away as California were relieved to hear the news via Facebook timelines.

The feature is not new. In fact, Facebook announced the “Safety Check” last October. However, this appears to be the first time it’s been utilized on such a grand scale.
In their press release, Facebook said its engineers in Japan began working on the project after the 2011 earthquake and tsunami in the country. The team wanted to give its users a fast and easy way to let as many people as possible know they were safe after a major disaster. “The team set out to create a simple and easy-to-use tool that allows people to connect with their network of friends and family when it matters most,” Facebook said.

The tool immediately activates if a person meets the following criteria: 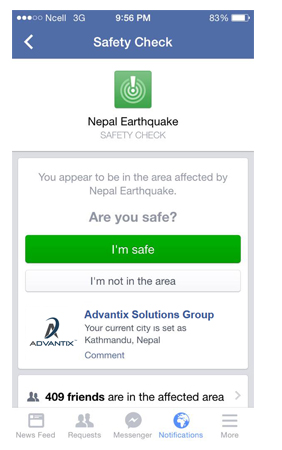 I would hate to ever be in a situation that would require me to use Safety Check. But if I am, it looks like it would be a great tool to help stay connected to those I care about, and ease my mind by knowing my loved ones are out of harm’s way.

How can you help?

If you are interested in helping, Advantix encourages you to help any way you can. Click HERE to find a list of groups taking donations for relief efforts in Nepal.

Next View all blog posts